Find Out What Colorful Craft Inspired My Book Loveweaver

Discovering tablet weaving was the genesis of my historical romance, Loveweaver. The more I read about this ancient craft, the more interested I became. The idea for my heroine, Llyrica, a Dane tablet weaver in the 9th century, was conceived and my book began to take shape.

There is some debate on where tablet weaving began, but a partial loom was found at a burial site in Norway on the Viking ship, the Oseberg. It dates to around 850 AD. 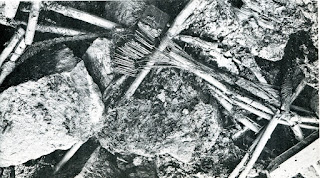 At the time of my initial research (15 years ago) internet research was not what it is today, much less You Tube tutorials, so I learned to tablet weave via this book, Card Weaving. It taught me all I needed to know about building my little loom, how to make my "tablets",  how to read a pattern, and even how to create my own designs. The design you see on the images of my loom is the design that Llyrica wove for Slayde, the hero of Loveweaver. It is a design that goes quickly since the tablets turn forward 4 times and backward 4 times to form one motif. There are designs where tablets are turned in groups in opposing directions and you really need to pay attention or things can go wrong before you know it. 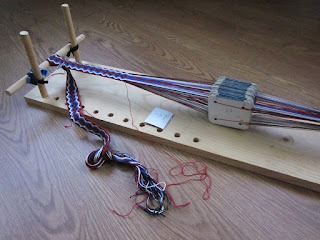