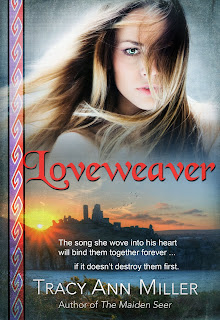 The year 895. Slayde's job as an top military leader of Kent is to rid England of the last of the Viking raiders. But Llyrica is no ordinary Viking. She's a beauty with a mysterious past ... and a talent for weaving song spells. Even as Slayde saves her from drowning, he knows Llyrica will be a dangerous distraction.

Llyrica is now a stranger in a strange land on a mission to fulfill a deathbed promise. But she must also find her missing brother. This man, Slayde, known as The StoneHeart in his country, seems determined to block her at every turn. And yet she can't help but be drawn to the affectionate, loving side of him that awakens when he sleeps - The sleepwalker.

Unknown to both Llyrica and Slayde, each will use the other to accomplish their quests. Both will also fall under the song spell that she wove into the braid of his tunic.

Will her Lovespell ensure a happily ever after for them? Or condemn them to a love that was never meant to be?