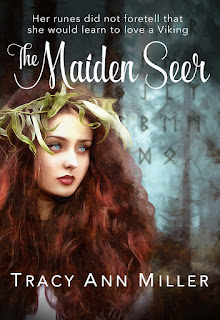 Konnar doesn’t believe in the power to tell the future or to see into the unknown. But that changes when Amber comes into his life.

Amber, known in her homeland of Wessex, as the Maiden Seer, seeks refuge from her dark foretelling dreams of war. The rune readings she gives to her followers have also become too much to bear. But this can only happen after she fulfills her blackest dream … one in which she foresees herself killing a man.

Konnar hopes the violent memories of his life as a Viking raider and tragic losses will be quieted when he leaves England forever. This upcoming task will pay for his future and provide for the village who depends on him. But, abducting the Maiden Seer and delivering her to the wealthy client goes wildly awry.

Amber seems to know Konnar’s painful secret and claims to foresee a solution. While it enrages him that she negotiates her freedom with this knowledge, should Konnar dare believe the prophetess can help him?

He is her captor, but hiding behind his might and violent history, is a man in need of forgiveness. It is that vulnerable side of him that she learns to love, as she enlists him on her dangerous mission to help the king of England.

The Viking and the Maiden Seer journey throughout England to carry out her prophetic vision. Yet, they struggle with their mutual passion for each other, each unsure of the others true intentions.

But what could it mean, Amber’s dark dream that began it all?